The snake of the Faculty of Law. Her elemental affinity is Water. Her specialty is Poison.
In this story, she was El-Melloi II’s first rival. If Heartless is his Moriarty, then she is his Irene Adler. Though the chance of developing a romantic relationship with someone was never there for El-Melloi II.
In reality, much of her life was shaped by her desire for revenge against her father. Heading into the depths of the Spiritual Tomb of Albion on his own, he abandoned his ex-wife and son entirely out of nowhere upon his return. Giving birth to her through his second wife, he died a coward. In order to prove the worthlessness of her father, she joined the family of Norwich before slipping into the Faculty of Law, the easiest route for a magus with no pressure from their own bloodline.
As a result, she coincidentally received information from the Faculty of Law’s Information Division, and became strangely obsessed with a certain Doctor Heartless. She began pursuing him, thinking there was a possibility he was her long lost brother, Adashino Kurou.
If El-Melloi II had “a first rate sense of being a magus but a second rate skill,” then Adashino was “a magus of first rate skill, but no sense of being one.” Though her nature is closer to that of a Spellcaster, her place in the Faculty of Law which has given up pursuit of the Root fit her perfectly.
Though not explicitly stated within the work, her glasses are Mystic Eye Killers.
Just as her brother Heartless (Adashino Kurou) once possessed, she bears Mystic Eyes of Finding. In her investigations, the reason Hishiri was able to reach such precise results so quickly was because of those eyes. Of course within the Faculty of Law they were of great use, but they were also used to help find her brother.
As a bit of a digression, she has been entertaining herself greatly with the arrival of the new, plump, and somewhat out of place member of the Faculty of Law. 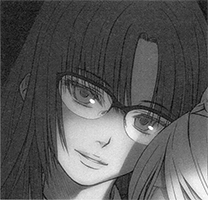