Golden Theater of the Flamboyant.
Red Saber’s Noble Phantasm; represented the explosion of her bothersome artistic talent.
Its precise name was Aestus Estus Domus Aurea.
Aestus Ustus is Latin for “passion” and “heat,” while Domus Aurea is the name of the theater that was constructed1.
It was the manifestation of the tale of Red Sabre declaring “Listen to my song!” and locking everyone in the theatre to listen to his singing.
This Noble Phantasm creates a golden theater in which everything is advantageous to Saber, and makes it into the battlefield. There were rose petals fluttering through the air.
It was different from a Reality Marble, which covered the current World with a different World. The Golden Theatre could persist for long periods because it was built on top of the current World.
As an aside, upon the materialization of The Golden Theater, Red Saber’s sword was initially designed to be enshrouded in a raging inferno of flames like those of Mount Vesuvius.
However, it was too difficult to graphically realize in the game, so it was cut. This is an unfortunate drawback to the use of a portable game system.
In terms of derivatives, it seemed that there was the “Silver Workshop” (Hakugin Koubou) for Saber’s artistic endeavours, and “Blazing Kitchen” for cooking competitions. Such was the will of Her Majesty.2 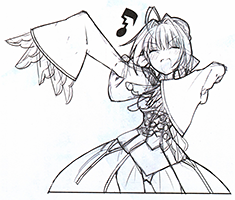