All the World’s Desire.
This is the anti-planet Noble Phantasm Kiara gains after her reincarnation.
Angra Mainyu is the most self-serving heinous Noble Phantasm of them all where Kiara uses the world to masturbate.
It is an Authority where Kiara offers her body to all living things on Earth, including humans, animals, and plants. By completely accepting them all she gains the greatest sensation as well as growth.
This Noble Phantasm is derided for being demonic and it’s similar to the living sacrifices used for certain artificial magic ceremonies in the past in order to prove the evil of humans.
It is a vortex of pleasure that melts all sentient beings, and digests their “life” in an instant. While in reality it all happens in an instant, but it feels like an eternity of pleasure.
Regardless of how different the structure of a beings intelligence may be, this vortex affects all intelligent life without exception. It is not a Noble Phantasm that is limited to affect only those on Earth.
The damage increases if certain conditions are met.
If the target is of the opposite sex, the damage increases.
The more intelligent a being is, the more damage it does.
As far as the setting and lore are concerned, the Servant who would be hit with the least damage would be Archer, and Gilgamesh would be damaged the most.
The reason why this attack’s power, visuals, and scale are so huge is because reincarnated Kiara is a being similar to Saver.
People who devote their life to bringing salvation to Sattvas (living things) are referred to as Bodhisattvas. People who have attained moksha (libertation/release) and become Buddhas are also Bodhisattvas. A Bodhisattva is a Deva [deity] of universe’s scale and power, and can easily manage things on the scale of the Solar System.
Buddhism has a sense of scale of the universe that stands out from that of other religions. There are concepts like Nayuta (1060) and “The Infinitely Vast Number” (1068) which were created to represent the scale and size of a Buddha.
The entire universe is the domain of a Buddha. In Buddhism the universe in considered to be made up of three billion solar systems (a great trichiliocosm). A galaxy comprises of 3000 solar systems (a small trichiliocosm), and 1000 small trichiliocosms make up a trichiliocosm.
This actually aligns with the real scale of galaxies, galaxy clusters, and super clusters.
India had this stuff figured out over 2000 years ago? Holy crap!
In the initial design phase of the game I submitted some paperwork describing this Noble Phantasm. I thought there would be no way that this gets by CERO untouched, but surprisingly enough it did.
I still have no idea how this was able to make it past them. 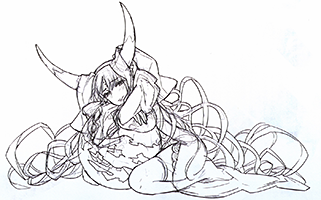