These are the Jinako’s words directed at Rani’s “plan.”
Based off an internet meme that arose from what a biased gamer from a foreign country [said in an interview]. After witnessing moe culture firsthand he said “The Japanese are gone. They are already living in the future.”
Let’s take these words as a compliment for the alchemists of the Atlas Institute who devoted themselves to the search for a better future for the human race.
By the way, Sialim , who is the content creator that imagined the character Rani, had originally designed Rani to be one of those characters that is actually wearing panties, but often appears not to be. In other words, Sialim is a master of “Zettai Ryouiki.”

To digress, in CCC there is a lot of obscure net slang, which is unusual for a TYPE-MOON game.
This is because we finally staged a game in a cyber world, and one of the themes of CCC is “illegal modification” so we aimed to attract the attention of some rather worldly-minded people.1
Including a lot of slang makes the dialogue interesting and fun, but at the same time it must be used carefully as it is a double edged sword that reduces the accessibility of a product. 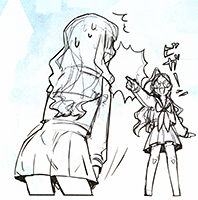