One of the Servants of the “Red” camp. A Servant truly worthy of the title of mad warrior, who completely ignored the plans of the other Servants and Masters and disappeared like a star after merely rampaging around. His true name is Spartacus, the strongest gladiator who raised a large-scale rebellion of slaves in Ancient Rome.
Spartacus was the leader of a revolt and led the other slaves as a skilled leader, but he always fought at the head of the front lines, and even when the revolt was subjugated by the army, he fought until his death. Perhaps due to that, Spartacus’ corpse is said to have been torn to pieces and never found anywhere on the battlefield afterwards.
Having been summoned as a Berserker, Spartacus is always thinking of only “rebellion.” Because of that, it is widely said that he is a Servant who wouldn’t hesitate to kill his own Master and whose “defeat is certain from the moment he is summoned” among the regular subspecies Holy Grail Wars—However, in truth, Spartacus wouldn’t actively revolt against his Master. His Mad Enhancement is EX rank and it is virtually impossible to come to a mutual understanding with him, but he is capable of judging whether his Master is an “oppressor” or not.
…The problem is that pretty much all the Masters who participate in the subspecies Holy Grail Wars are magi in the first place, and they are categorized as oppressors in the eyes of Spartacus.
If his Master was someone who “accidently got involved in the war,” it would be fully possible for Spartacus to fight at their side right until their defeat. Though I will not give names, he is particularly compatible with a certain red-haired boy. His battle is always against those above him and against himself, after all. Of course, it’s another matter entirely whether or not they would be able to achieve victory in the Holy Grail War.
Though the chances of it are low, should Spartacus be summoned as a Saber, even more caution (in terms of rebellion) would be needed against him, demonstrating how troublesome a Servant he is. But he might still have a chance of winning if he was chosen by a child who doesn’t know anything. 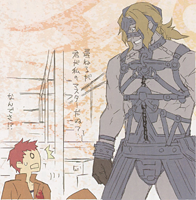