This wakame proliferated a lot.
His memories and morals are missing on a large scale due to having been replaced with a puppet.
His own name and objectives are in a vague state so loyalty was imprinted on him by Julian, and thereafter he has been used as a pawn in the Holy Grail War. As it can be seen he’s similar to a cripple, so he appears to usually be sheltered at the Ainsworth castle without coming outside. Julian-kun’s stress is horrible.
The Assassin Card, unlike the others, is a Card tied not to a specific Heroic Spirit, but to a certain group of assassins. A different assassin will respectively turn up according to the user of the Card. Those relatively close to the personality and nature of the user, or those with some ties or another are said to be chosen. Inside, the natures of the assassins could have been mixed and altered as well.
The one he drew was an assassin who implanted a malignant Elemental into his right arm. Traces of further surgical and industrial processes having been performed after the witchcraft-like implant can be seen. The arm can multiply by feeding on mana, and can automatically move to a certain degree even if it’s detached. In this work, he made a monster with the multiplied arms, and demonstrated a style of assassination that one can’t really know if it’s Assassin-like or not, quietly sneaking away and going around the enemy’s back to stab them with a poisoned knife.
The concept is “The weakest Assassin I could think of.” Like it or not, I think he worked dramatically quite well. 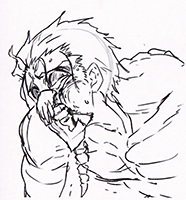