This is the thing of supreme beauty that Gilgamesh exposes in the fifth chapter.
While writing the script I got excited about the prospect of including a cast-off (nude) scene in the game and told one of the staff, “For this scene let’s have Gil in his swimsuit, and then keep the camera directed up high so we only show bare skin in order to trick the players.”
But then the staff piped up, “Huh? You need a nude shot of Gil right? We already have one done you know.” It made me feel like I was late to the party.
After that we discovered that some staff had randomly made some extra costumes for the female protagonist outside of work hours, including a swimsuit version, gym uniform and even tights. Of course we happily put them all into the game.
I want to give a big thanks to Kunimitsu-san from the 3D modeling team. Thanks to you, from the second week onwards in game the protagonist is undoubtedly qualified as a pervert. 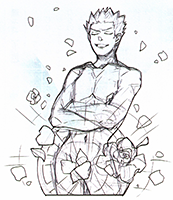