Sola-Ui’s younger brother, who existence is briefly referenced in Fate/Zero. He is an utterly spoiled son of a rich family who inherited the Magic Crest of the Sophia-Ri family. A rough drawing of him should be included somewhere in this section. I believe it’s a drawing that really gives off the image of a guy full of confidence and pride, yet who will be inevitably dragged into a tragedy at some point, but what do you think?
His abilities are first rate, but he has somewhat of a trauma due to how his (future) brother-in-law went out full of confidence and yet came back in a wretched state in the past. In this Great Holy Grail War, he had the duty of collecting the catalysts for summoning Heroic Spirits. The fact that he gathered that many catalysts in such a short time was largely because the Sophia-Ri had secretly concealed and stored many of them and because he made use of his family’s connections to get the rest. It goes without saying that the collection of so many catalysts at once is limited to Apocrypha alone. 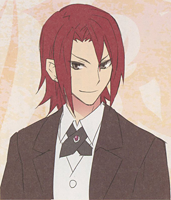