One of the invitees to Adra, the Castle of Separation. An Astrologer. His elemental affinity is Wind. His aria, "Lead me," is also from Astrology.
Depending on the horoscope, he uses twelve knives marked for the twelve signs of the zodiac, and is able not only to predict the future but also to manipulate cause and effect within an extremely limited area. For example, things like creating a future where an opponent’s attack doesn’t hit.
He was actually one of the survivors of the Spiritual Tomb of Albion, as described in Grand Roll. Though his reputation as a master-killer and labyrinth returnee were decided rather early, the details about the Spiritual Tomb of Albion underneath the Clock Tower were decided rather late, causing quite some issues for the author. 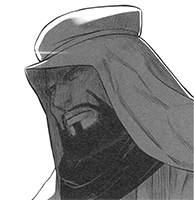