Aerial Gardens of Vanity. The strongest and largest-scale Noble Phantasm that Assassin of “Red” proudly owns. Rather than being Anti-World, perhaps it would be more accurate to call it a giant Boundary Field. Assassin? The Servant that specializes in hiding and killing Masters? This is a dumbfounding Noble Phantasm that throws away such common knowledge to the other side of the horizon.
It was already referenced in the novels, but Semiramis didn’t actually create the Hanging Gardens. However, this “falsehood” that was included into Semiramis’ legend at some point over time eventually became true.
However, since it brings something false into the real world, it has to use real materials for its construction. If this were the true Hanging Gardens, it would be able to activate—to manifest just by releasing its true name like a normal Noble Phantasm, though.
It basically requires enough money to buy a small country in order to obtain all the necessary materials. Rather, the more money used in its construction, the more its Mystery deepens and the Garden is strengthened, “so, if it’s for the sake of obtaining the Holy Grail, you should have the resolve to become bankrupt, my Master”—is Semiramis-sama’s way of putting it.
In a normal Holy Grail War, this Noble Phantasm wouldn’t be used in the first place. Though there’s also the material cost, the real problem is the three-days-three-nights ritual for it. This is a necessary ritual in order to hammer in the nails of “truth” into this falsehood, this three-days-three-nights duration has no special allegorical significance to it; Semiramis’ chant simply requires seventy-two hours to complete. The bigger the Gardens are made, the more nails are needed to be driven into it all over.
Therefore, in a normal Holy Grail War, as long as Semiramis doesn’t secure an excellently concealed location beforehand, the Hanging Gardens are useless as a Noble Phantasm. And most of all, Semiramis won’t willingly try to make the Hanging Gardens unless her Master is interesting enough. 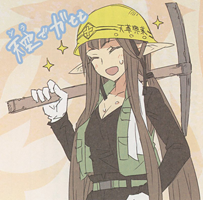