Beatrice Flowerchild. For details, refer to the original manga.
After being handed over Heracles’ Card by Julian-sama, Beako-san’s tension was already at MAX. If it’s with its overwhelming specs, she can briefly and easily fight Shirou fair and square from the front without needing any imprudent cheap tricks… She should.
Actually, Beatrice cornered Shirou to the point that there was only one step left, but Shirou, who saw he couldn’t rival her, escaped as fast as he could. Can’t be helped if he ran away. For the time being let’s go home and heal the body and mind with some homemade Julian-sama goods, let’s do that. While saying that, she was about to turn back when she was sniped from a long distance. Poor Beatrice’s body exploded and was scattered in all directions. She was able to avoid death with Heracles’ skill “Twelve Labors”, but the Card was forcibly ejected. Just like that she ended up routing with her flesh and blood. It’s because of this experience that she says “Again?” when she was sniped by Kuro.
…But, it seems that was cut because it was considered inserting a scene in which Shirou briefly and easily fights a little girl was image-wise weird. Little girls can only be beaten by little girls.
Anyway, because of her lesson from her defeat next time she would fight using her head more… Or so we thought, and by using a Card that stamped a specs gorilla superior to Heracles she made Illya-san and company suffer, but that’s another story. 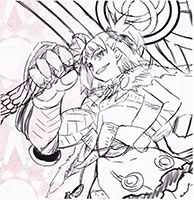