The Earth after 2018, which Fujimaru Ritsuka had a glimpse of in the Lostroom.
The Earth whose ground’s surface Texture has been pruned by the appearance of the Lostbelts.
A “brand new shell of a planet” where the surface nature and traces of civilization have been lost. Where the pruned Texture (human history) has vanished to is unknown. The branches of the Trees of Emptiness that grew from the surface of the earth became a membrane that covered the Earth, creating a huge curtain at the boundary between the troposphere and the stratosphere, the tropopause. Although electromagnetic waves can be transmitted, substances cannot pass through this tent and terrestrial humanity has been trapped. It is conjectured that the original human history will not be returned as long as the seven Lostbelts aren’t cut off.
It became a lifeless planet apart from the Lostbelts, but there seems to be some rare areas, buildings and lives that were “left behind from the blanking” during the blanking process.
The blanking was conducted on December 31, 2017. The invasion of Trees of Emptiness began from space, and seven Trees of Emptiness fell on the surface of the earth, creating seven Lostbelts. The land of true history disappeared, and the Lostbelts were protected by storm walls. Then, after some time lag, the surface of the earth was blanked all at once. The blanking is considered to have spread radially from each Lostbelt. 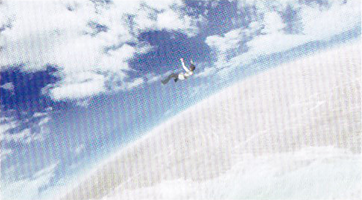