Faker’s older brother. The true Hephaestion.
Iskandar’s closest friend…though he didn’t think so himself.
While his sister spread such information around, Hephaestion was aware that was simply counter-intelligence. Hephaestion was inserted at Iskandar’s side so as, even if only a little, to reduce the chance of him being attacked.
His sister’s relationship with Iskandar’s other retainers was rather poor, a daily pain in Hephaestion’s stomach as he tried to find a way to mend those relationships. If alive today, he would no doubt be accused of having a siscon streak in him. In a way, one could say that fear became accurate after his death.
At any rate, when Hephaestion was summoned by Iskandar’s Noble Phantasm Ionian Hetairoi, he was the first to notice his sister’s absence.
If summoned as a Servant, he would gain a number of Iskandar’s Skills and Noble Phantasms from his own Personal Skill, “He is Another Iskandar (True).” The difference between his version and his sister’s “Fake” version of the skill is that his version does not copy the acquired abilities at a reduced rank. Conversely, it would be difficult to use them in the ways Faker does. 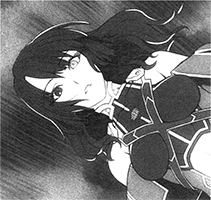