Aozaki Touko’s teacher. Head of one of the Three Great Aristocratic Families, Valueleta. Lord of the Faculty of Creation, she was a Brand, a magus of the highest practical rank.
As that consequently places her as the teacher of Araya Souren and a certain other individual, more care was taken in writing her for Case Files than any other character. That being said, when asked about her general image, the response that came back was. “Got it. I’ll leave it all up to you, Mr. Sanda.” The insane image Type Moon had garnered up to that point had just been reinforced. One could say that was the point the author came to terms with the fact that Case Files was going to be accelerated as a whole.
She possesses a triple affinity for Earth, Water, and Wind. Her specialty is Sympathetic Magecraft. Though she only showed a brief look at her abilities in the series, she is especially skilled with magecraft using sand, and the small bag she carries around with her at all times can spill out an immeasurable amount of it. Within the series, Touko says something along the lines of “Please spare me one of your pictures at least.” That is because she knows full well what fate awaits those who are drawn in her sand pictures.

In a manner of speaking, she is the idealized image of a magus. She navigates the political sphere as easily as she breathes, and progresses her research in magecraft as easily as she walks. The fact she strongly supported the Sealing Designation of her favorite pupil Touko is a simple manifestation of that nature. Thinking there were issues of greater importance that took precedence, such a conclusion was only natural for her, and so she didn’t hesitate for a moment in her decision. Feeling no sense of contradiction or conflict in her own character, she is like a mountain ascetic still entrenched in the ways of the world, a perfect and powerful woman.
Personifying the concept that what the people of any given age loved was to be considered art, unlike many magi of her advanced age, she thoroughly enjoys brand new technologies, like her iPod and her personal computer. Though she as an air of approachability to anyone regardless of their relative standings, her total lack of any pretense has the terrifying effect of feeling like she can see through you right down to your very core.
By nature, such pretense and complexity is necessary for humans.
These are inventions created by humans so that society can move along unhindered, after all.
For a member of one of the Three Great Aristocratic Families, removing that necessary element from everything is a suitable kind of monstrosity, don’t you think?
Additionally, her name was given by Nasu Kinoko.
As someone in a position of such enormous power in the Clock Tower, like putting the eyes in a Buddha1, the author begged Nasu to be the one to name her. 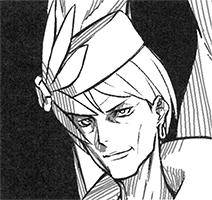