The Rider class Servant of the Fourth Holy Grail War. He was originally supposed to be summoned by Kayneth El-Melloi Archibald, but instead formed a contract with Waver Velvet, who stole the catalyst Kayneth had prepared before the war began.
Going in, the original author entrusted me with just three pieces of information regarding Alexander: his true name, the Noble Phantasm called “Army of the King,” and the fact that there must be a development where Saber comes to reconsider her own kingship through her conflict with him and Gilgamesh.
So, starting from there I figured the most important thing was that he be a totally different sort of king from both Saber and Gilgamesh. That’s why I decided to come up with his general appearance and personality first, and only research his actual history afterward, all the while looking for ways to twist and distort things along the vector I had already imagined for him. But then, the more I read about him, the more I realized Alexander the Great’s actual life was like something out of Shounen Jump. I barely had to change anything about him at all! With the way he faced formidable foes with the utmost respect and behaved more like an adventurer than a statesman, I can’t help but imagine him as a character in one of Hara Tetsuo’s manga. Actually, now that I think about it, It’d be great if Hara Tetsuo made an Alexander the Great themed manga for real! I’m being serious.
His love of the Iliad ran so deep that he once totally disregarded strategy in favor of sightseeing around the city of Troy. He might have been the first celebrity otaku in human history.

A Rider-class Servant in Altera’s army.
He was born in the 4th century BC to the royal family of Macedonia, a kingdom in Greece.
Thanks to the influence of his mother, Olympias, he was fascinated by the exploits of heroes in mythology. He believed that he was the son of Zeus (regarded to be one and the same as the Egyptian god Amun).
He inherited the throne at the young age of twenty, and began his great conquest by uniting the Grecian states.
He raised an army and led them in a campaign to the East, not only conquering the great kingdom of Persia, but also many of the kingdoms under its control, including Egypt.
The name Iskandar was given to him by the Arabs and the Persians. His campaign to the East went as far as India. There, his troops and generals complained of fatigue, and so he turned back to Babylon, where he suddenly passed away.
As a conqueror he created the greatest empire in the history of mankind, but his dying words, “Only the strongest should rule the empire,” ended up splitting it apart instead.
Today, the Heroic Spirit Iskandar is a Top Servant, known among his peers as the “King of Conquerors.”
When the Moon Cell senses that Altera has been released, it summons Iskandar to do battle with her. However, being unaccustomed to fighting on SE.RA.PH., with all its subtle differences to the Earth he lived and died on, he approaches the fight as a kind of warm-up.
Of course, he loses. Altera then declares that his life belongs to her and forces him to join her army. (This sort of thing is bound to happen when you don’t play with your full attention on the game…)
This also makes him a Servant of the Main Character, but in the game he is treated in similar fashion to Altera.
Altera understands that her victory over Iskandar was a matter of luck, and that they are evenly matched in terms of strength. Iskandar understands that as well, but accepts his defeat with dignity. From then on, he pledges to assist Altera in achieving her goals.
Make no mistake, however: He is loyal only to Altera, and not the Umbral Star.

The King of Conquerors, Iskandar. Also known as Alexander the Great.
A great Heroic Spirit, whose exploits were only matched by a small handful of others across the entirety of human history.
Summoned in the Fourth Holy Grail War under the class of Rider, he was the Servant of Waver Velvet. His Noble Phantasms were Gordius Wheel, the Wheel of Heaven’s Might, on which Faker’s “Hecatic Wheel” was based, as well as the Rank EX Ionian Hetairoi, Army of the King, which could summon forth tens of thousands of Heroic Spirits.
Though he never really appeared in Case Files himself, his influence was enormous.
Even Heartless himself had an undeniable eye for him. Due to his great exploits in life, some say he was chosen by the twelve historical Gods of Olympus1…Heartless’ plan began from that anecdote.
Though it can’t be said whether the words Gray heard at the end of Case Files truly belonged to him or not, the resurrection of the box in her hands was unquestionably a miracle. 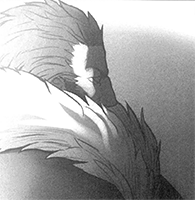