Daughter of a family who specalizes in Mystic Eyes, she has a number of Mystic Eyes of her own, fashioned from precious stones, which she can swap out.
Though she is capable of activating various types of Mystic Eyes, that effectively means her brain must create an equal number of pathways through which to activate them. Practically speaking, in order to use her eight varieties of Mystic Eyes, the number of times her brain had been tampered with approaches seven times that. That being the case, the fact she has managed to maintain any sort of stable personality is a testament to her genius.
In developing plans for Rail Zeppelin, it was obvious that someone specialized in Mystic Eyes would be necessary for the setting, but even so she worked well for it. Being a spy for the Neutralist Meluastea faction, a lover of honey traps, with an eyepatch that looked like it was stolen from some anime, she is overflowing with character. Despite that, she seemed to have a strange sense of unity and robustness, to the point even the author had difficulty pinpointing where her true nature stopped and where the acting began.
In regards to her conversation with Melvin in the final volume, since they were both people drenched in lies, for her that must have been one of the few times she needed no deception. 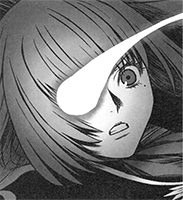