The infinitesimal global environment model. A Mystic code that imitates the soul of the earth.
A hypothesis that the Animusphere family of “Astrology,” one of the Clock Tower’s 12 departments, continued to pursue.
It assumes that the planet possesses a “soul,” and copies that soul, as the “data of another Earth” from a 100 years ahead that is operated as a virtual simulation.
It was launched by Marisbury Animusphere, and since then, Chaldea has guaranteed the future where “civilization still exists even after 100 years” by observing this global model.
It is a mass of information dense enough to have mass, and it is said to be impossible to touch by matter due to their difference of phase.
Animusphere thought that it was impossible to create an “existence that identical to the Earth" from scratch, but it would be possible to copy the soul in its entirety, and he put this in practice. Of course, the content of the “file” cannot be analyzed even if the copy is successful, however, what’s important is the surface of the “copied file.”
There is no need to analyze the content if the goal is to just keep it running. Animusphere activated the duplicated soul of the Earth without any intention of opening its contents, treating it as a simulation tool to observe 100 years into the future. As a result, it is said that once stopped, it will be impossible to restart. After all, nobody knows the structure of its contents.
Since it can be used as an unwavering map of human history, it can also be used as a support system for the Pseudo-Spiritron conversion and transference, Rayshift.
At the start of FGO part two, this treasure of humanity was frozen and sealed by the hands of Lostbelt Servant Anastasia. 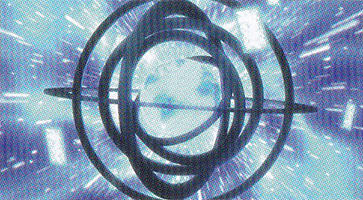