C.C.C.
An anti-planet Noble Phantasm. It’s an attack that violates the world through BB’s control over Moon Cell. It’s also called a pseudo-spiritron trap.
By drawing out the maximum potential of BB’s EX skill Potnia Theron, a world purge via rewriting of events is carried out.
The space that BB invades becomes an imaginary space and it becomes a curse that eclipses the world. Just like its name C.C.C. it causes huge damage from the curse cutting away at reality.
The name “Cursed” is based on the image of a giant spoon that scoops out the surface of the Moon and turns it into a cursed space (the imaginary space).
During development when the game’s concept was still being decided, we considered making it a Noble Phantasm that was homage to Black Sakura.

…is what we wanted to do, but the cost to design and implement this Noble Phantasm and Black Sakura from scratch was high enough that we decided to use the money elsewhere. Hence it was axed.
Like BB says, money isn’t unlimited. In order to get the Servants all dressed up in their swimsuits, there had to be some cuts in other areas of the game. 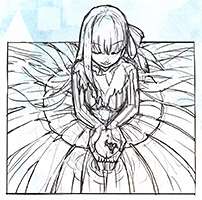