1
Gou Tou-kun.
Found on the first floor of the Old School Building. An ordinary student NPC you find in front of the caretaker’s office where Jinako has holed herself up.
He is good at imitating people… well maybe it’s better to say that imitation is his life. He has the rather odd ability to completely take up the role of characters from movies he has recently watched. This is why his lines, behavior, and mannerisms change from chapter to chapter.
From chapter 5 onwards he disappears. The reason for this is explained by the NPC found in front of the school store. 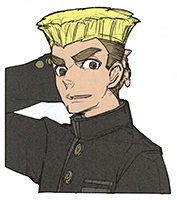