Sometimes he is the supervisor of the Holy Grail War.
Sometimes he is the attendant at Tsukuyomi Onsen.
Sometimes he is the teller at the school store.
And sometimes he is the fake priest that we all know who is a hidden boss that’s always making unreasonable demands of Lancer.
When asked by one of the staff “Is it okay if I make Kotomine the school store teller?” I became a bit worried about their health and replied “Ishikawa-san… you must be tired….” But if it works it works, hence Kotomine makes his appearance as our wonderful teller in CCC. We took his design in a new direction so players wouldn’t balk at the existence of such a suspicious person working as a teller.
Kotomine is the only one who sells alternate clothing for servants. In order to obtain these clothes he dives into the slumbering chaos of the imaginary number space “Fuji Fierce Tiger 8th Battle Arena” and defeats the fearsome opponents there in order to return alive with his haul.
If we made this into a spin-off and had KKUMM-sensei (Mashin Eiichiro according to one theory) do it, I’m sure it would be rather awesome. 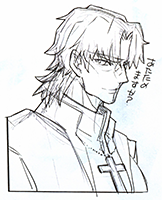