One of the Servants of the “Black” camp. Her true name is Frankenstein. Her source, it goes without saying, is Mary Shelly’s novel “Frankenstein: or the Modern Prometheus.”
She is a girl clad in a wedding-dress-like outfit. I think it’s very natural for people to point out “But Frankenstein was male in the novel!,” but her true role is to give birth to Adam… a male artificial human.
She is an artificial human—a homunculus made by Victor Frankenstein, a genius scientist and alchemist, using the power of lightning.
Perhaps due to being summoned by Caules, whose abilities were inferior compared to the rest of the “Black” camp, she isn’t that powerful as a Servant even with the Mad Enhancement of a Berserker.
Due to her unique skill “Galvanism,” she has the big advantage of efficiently replenishing her mana supply at an abnormally high rate, but since her mana supply is being taken care of by the homunculi in this war, that advantage is made useless. Her Noble Phantasm also only reaches B rank by making a suicide attack, while the rest of the time its destructive power is at best C~D rank. Most likely, she would be incapable of winning in either a normal Holy Grail War or the Great Holy Grail War unless she had great luck and her Master had excellent judgement.
Excluding Siegfried, she is the first Servant to leave the stage. Even her last act of unleashing her Noble Phantasm with the remainder of her power mustered forth should have ended up being meaningless, but—
Those who have read the final volume will know what happened regarding her afterwards. The Noble Phantasm she used bounced over to a new owner, saved the world, and brought Caules and the others victory.
She gives off the image of a large-breed dog that, despite never wagging her tail and always making a bored expression, desperately approaches people. Like how she always kept close to Caules when she walked behind him.
Due to having been rebuked for her lack of emotion, she tries to be sensitive of people’s feelings. When she noticed that Caules was painfully forcing himself to speak coldly as he used his final Command Spell, Frankenstein realized the seemingly miraculous fact that “someone would feel sorrow over her death.” That was, without a doubt, the first precious and beautiful experience in her entire life.
There is an extremely low possibility of a second Frankenstein being born due to her Noble Phantasm “Blasted Tree: Lightning Branch of Crucifixion.”
She drew out that possibility with her strong will.
Thought this is a digression, I think Fran-chan in Capsule Servant looks super cute as her head rolls off when she is defeated, but what do you think? 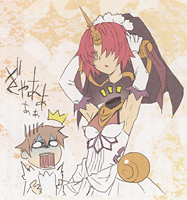