One of the Servants of the “Black” camp and the man who leads them. His true name is Vlad III, the protector of Romania, but his other name of “Dracula” is more overwhelmingly famous in the rest of the world outside of Romania. Due to Bram Stoker’s novel Dracula, he, who was formerly a local hero of Romania, instantly rose in fame worldwide as the classic example of vampires.
…Originally, Dracula meant “Son of the Dragon” and was far removed from a vampire. The reason why he became the classic example of vampires is due to none other than the fact that Vlad III’s deeds were too drenched in blood.
His overwhelming cruelty in skewering twenty thousand Turk soldiers caused Mehmet II, who vanquished the northern Roma Empire, to say “I fear no human. But the devil alone is a different matter.” In posterity, several of the episodes in his life were pointed out to be fabrications in order to pin crimes on him, but even so, his cruelty was so great it was forever carved into history.
And on the other hand, his heroic title as the “Shield of Christianity” who protected Romania from the hands of Mehmet II has been re-acknowledged.
Outside of the light novels, he also appears in Fate/EXTRA. This version of him is a fanatic knight whose appearance, weapons and words are different from the one in these novels, with his aspect as a man who loves his wife emphasized.
In the light novels, he was summoned with his aspect as a monarch emphasized. The fact that he was summoned in his homeland of Romania greatly contributes to this. Thanks to his fame bonus, his parameter ranks are higher compared to when he is summoned in other countries. In addition, he manifested as a Servant with extraordinary power due to his skill “Demonic Defender of the State.”
But even with that, he was gradually cornered by the collective attacks of the “Red” camp and stepped into a place where he couldn’t receive the benefits of his fame in order to retrieve the stolen Greater Grail.
Just as he was weakened and prepared to die, his Master Darnic appeared before him. He calmly made Vlad choose the most repugnant choice that Vlad wanted to avoid.
Though he is more terrifying than anyone else when enraged, he is fundamentally a military man of integrity who loves his country. Though the topic of vampires is no good with him, he could be called a Servant who is extremely easy to fight alongside if you exclude that point.
His misfortune laid in the fact that the cornerstone of their group, Saber of “Black,” disappeared before he could fight and, most of all, that his Master was an archetypal magus.
…Even so. His form as he led his troops and tried to protect his country and the Holy Grail was truly noble.
Furthermore, the other compatible class that he is capable of being summoned as is Berserker. In this case, perhaps due to the effects of Mad Enhancement, he would easily accept the fact that he is a vampire and fight as a monster instead of a king. His weapons are the stakes he shoots out from his body. 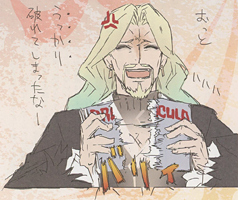