Shirou’s friend.
Sakura’s older brother.
As Rider’s Master, Shirou comes into conflict with him on numerous occasions.
Though he is selfish and has the bad habit of looking down on other people, he is virtuous in his own way, and while he may be warped he is not actually a bad person.
He values rules (but he doesn’t follow them himself), he hates injustice (if he’s not the one responsible), and he is kind to women (excepting “his” women, of course). As you can see, he’s clearly a pretty cool guy.
Due to the gap between his “ideal world” and the world he actually lives in, his personality has become warped, but when Shirou first made his acquaintance four years ago he wasn’t nearly as bad as he is now.
As you might expect, he stumbled across Shirou doing menial tasks for people free of charge, and despite (seriously) deriding him as an idiot from behind his back, he hung around with him until he was done. At the end of the day, Shinji laughed as if he was having a good time, and exclaimed, “You may be an idiot, but you sure do good work, at least!”
Perhaps Shirou appreciated Shinji’s honesty despite his foul mouth, because afterward they became friends.
Though Shinji often made fun of him, in the shadows he socially assassinated anybody that took advantage of Shirou, and frequently invited him over to his house to hang out. It seems they really were close.
However, as you know, for a temperamental genius like Shinji even a friend of many years is not safe from suddenly becoming his enemy for incomprehensible reasons.
Basically, he’s the kind of person that’s reliable when he’s on your side but ends up being really troublesome if he turns on you.
Originally there was going to be an option to accept his invitation to join forces in the Saber route, but tragically we ran out of time and were forced to cut it.
Ah, if we’d included that route (let’s call it the “Shinji route”), players would have gotten to see a bit of Shinji’s good side, but there was just no way. Please, find it in your hearts to forgive us!

Matou Shinji.
He is a game champion from the Asia area, and he treats his participation as a Master in the Holy Grail War as though it were just part of a game.
He is an extremely selfish individual and considers himself to be one of the privileged few. He is a troubled boy who always considers those around them to be below him.
He sticks out for his rather immature behavior toward others, although it’s not unexpected seeing as he is a child who just reached the age of eight.
He tries to put up a strong front by projecting an avatar made to look like him when he will be 16, “I’m not a kid anymore!”
Shinji is actually a first-class magus. In order to “make” an excellent son, Shinji’s Mother purchased the semen of an excellent man and used it to bear Shinji. This was done despite the fact that she still has a living husband.
The protagonist fights Shinji in the first round.
It is a battle between the protagonist who has no reason to fight, and the genius gamer who thinks of the battle as another game to play.
Like many other Masters who thought similarly, Shinji only realized that the Holy Grail War was genuinely a death game upon his own defeat.

Shinji is also a Master that makes an appearance in CCC.
In CCC he is as usual; completely self-serving to the end, and altogether incompatible with the protagonist. Although he may seem like a pretty twisted individual, just a lonely eight year old kid.
“I’m lonely, I want to make friends.” Unable to ignore his true feelings, he makes up some reason to show up in the student council room.
His separation from Rider weighs on his mind, and he anxiously wants to return to the near side of the Moon as soon as possible.
While the protagonist has pretty bad luck with women, Shinji does too… well at least he has pretty terrible luck with Servants.
Shinji knows “the protagonist cried” because right before his death he was imprisoned by BB in an imaginary number space where he could search the vast universe of records, and learned about the ordeal upon searching for “things related to Matou Shinji.” …in that universe the last thing that was recorded related to Shinji’s life was a vision of a friend he didn’t care about who was crying as he reminisced about Shinji. 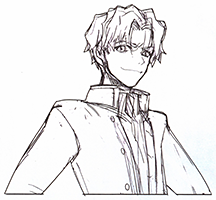