The Tuner of Garbage. Or, the garbage Tuner.
The second word to come out of his mouth is always “Mama.” The third is “women.” The fourth is “Money,” but before he can get to his fifth, he’ll start vomiting blood. Truly, from the bottom of his heart, a useless magus.
At present, he is the only one remaining who refers to El-Melloi II by the name of Waver.
Though his skill as a Tuner of Magic Crests is legendary, it was never something he wanted. His persistent habit of vomiting blood isn’t a gag at all. Without his magical hematopoietic medicine, it would be an ordeal to survive even a single day with his body.
As a result, the proper use of his Magic Circuits was rather difficult, so even though he had the talent to reach the rank of Brand, he retired from the competitive life of a magus early. After that many people, including his own father, deserted him.
But as a result, perhaps as some strange coincidence, he learned of his extraordinary talent for manipulating the Magical Circuits and thus Magic Crests of others. The father that deserted him returned with nothing but smiles, and many times more people than left him flocked to his side.
But, after going out to meet the returning crowd, Melvin had changed a little.
“This isn’t because of my environment or anything. I was a monster like this right from the beginning.”
So he says, but there was no doubt he began to test those around him more after that incident. This happened around the same time he lent Waver the money to visit the Far East after he bragged about turning the Clock Tower upside down.
His mother is a powerful woman, who even that Magdanel acknowledges. Even when Melvin’s father abandoned him, his mother stayed by his side. The tools he uses for his Tuning work that he carries around everywhere were all put together by his mother. The strangely high price for them on the Rail Zeppelin stems from the fact they are a Mystic Code of the Renaissance era, and possess a level of precision difficult to reproduce in the current age.
Though his first appearance was at the end of Volume 4, he existed in the proposal document written up a year prior to the release of Volume 1, acting together with Gray as the deciding factors for the direction Case Files would take. If Gray is a character symbolizing the present day El-Melloi II, then Melvin is the character that symbolizes his past. 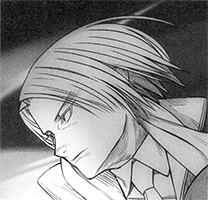