Tohno Shiki’s real father. The last Nanaya family head.
As a member of the Nanaya family that made their living by assassinating demon hybrids, he was a killing machine that started studying and refining the art of slaughter at an extremely young age.
His way of utilizing three-dimensional space was just like a spider climbing on a web. His preferred weapon was an iron club that looked like a drumstick, and despite using a blunt instrument he would dismember his targets as efficiently as if he had been using a blade.
Though Kiri himself had no doubt that he would live as an assassin his entire life, that all changed with the birth of the son he had fathered for the sole purpose of having a successor, and he retired from the business of killing. But, it was already too late. Six years after he and his family secluded themselves in the mountains, they faced retribution from the demon hybrids, their former prey.
…However, just before dying, he was able to engrave a “sense of being alive” into Kishima Kouma, who up until then had lacked any sort of human emotions. 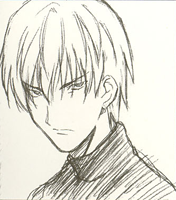