This is the road that goes down to the bottom of one’s heart.
From the very start of game development it was called “Maiden Coaster” but in the final game it was of course changed to just “Coaster.”
When you first enter the area, the visuals and background music give you the feeling that something crazy is about to start.
If you stopped and wondered, “Really? What the heck is going on?” it’s thanks to the great effort of the development team.
The speed of the coaster and scattering objects differ from heroine to heroine, and reveals their special characteristics.
For example Passionlip’s coaster features flowers.
Rani’s features astrological star constellations.
Rin’s features… gorgeous… jewels….
It’s a gimmick that resembles the elevator in EXTRA, but here there is no conversation with the maidens, you just listen to their monologue of poems and enjoy a passive turn.
By the way, the monologue of the boss heroines who come down in the coaster once again discusses their “day-to-day pain,” but the boss heroines who show up in the final battle area have no idea they told the protagonist such poems. 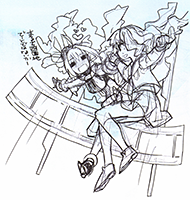