→Go check out Lord El Melloi II Case Files.
…But it would be too much to leave it at just that. She is the legitimate successor of the El Melloi clan. She is Lord El Melloi II’s younger stepsister. Her existence was hinted at in the El Melloi II entry of Character material which was published in 2006. In this series, she made a grand appearance along with her mercury maid Trimmau.
She only has a minor supporting role in this work, so her character was made a bit sweeter and childish than other works. Her hiding in a cardboard box and shouting “Boo!” with a hearty laugh is an excellent indication of this.
When her predecessor Kayneth went off in high spirits with his fiancée Sola-Ui to participate in the Holy Grail War and ended up magnificently having the table turned on him, Reines apparently had a dispute with the Sophia-Ri family, and she is still on bad terms with them even today.

A true joy-seeker of a girl. Her elemental affinity is Water.
Adopted sister of the previous Lord El-Melloi, Kayneth El-Melloi Archibald.
To be accurate, if going by blood relations, she is Kayneth’s niece. Her mother, being particularly average in her talent as a magus, married into the Archisorte branch family instead of taking her own family’s name, where she had a number of children.
Following Kayneth’s death, the El-Melloi family fell into a state of great internal discord. As a result, just as described in the story, Reines became the successor after it was determined she happened to have the best affinity for the Source Crest. At that time, in order to put a rest to the strife between the Archisorte and Archibald families and demonstrate her right to succession, she accepted adoption into Kayneth’s family. Though, as a continued act of defiance, she still operates under the name Archisorte.
After the events of Case Files, she finally learns to control her Mystic Eyes specialized in precision analysis, and under the tutelage of El-Melloi II, continues to grow her own abilities well in the research field. In the same way she gave a personality to Trimmau, her practical ability to “layer her own magecraft over that of another” is a truly fitting achievement for the El-Melloi name.

Though it’s not demonstrated so clearly in the story, her political maneuvering is vicious. For example, remember how her first meeting with Waver was after she abducted him. The fact she is used to doing such things is a demonstration of her political style.
“There’s no way I would dislike Reines.”
That’s why, despite learning of the numerous conspiracies occurring in the Clock Tower, when Gray said those words to her, it must have been deeply relieving for her.
If one wonders where she learned to be so ruthless in her political dealings and the exercising of her authority, that was influenced greatly by the support she received from a certain butler. During the span of Case Files, however, he was not present, and thus did not appear in the story. 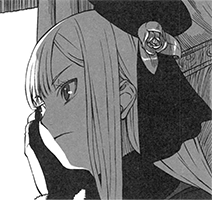