Leo Bistario Harwey.
He is the strongest Master participating in the Holy Grail War.
He is the eternally victorious King whose parameters are all maxed out.
(By the way, Rin is superior in terms of offensive codecasts, and Rani is superior is terms of raw computational power. However even if both of them were to challenge Leo together, Leo would still have the higher chance of victory.)
Although it is hard to imagine, this young boy with a mild character is the successor to the family that rules the world; the Harwey family.
Leo possesses great inborn talent (including magic circuits) which was further refined and expanded on through severe, yet thorough education.
Leo himself is more aware than anyone that he was raised to be a ruler, and that it is desired he becomes one.
A king is not one who comes from the human world.
A king is one who is sent to Earth by the heavens.
This is how one comes to posses the right to rule as King.
Leo’s directive as King is “Thoroughly Realized Ideal.”
In order to realize an ideal managed society where people with different levels of ability can live in equality, Leo has discarded all human emotions, yet as the same time he also retains an astounding level of kindness and empathy. This is contradictory, but Leo conquered the contradiction. He followed the path of the chosen and has reached a height that is unattainable for a normal human.
Though he has had no freedom since birth and is essentially a super human, the fact that he nevertheless has a calm personality is no doubt his innate nature.

If the protagonist represents change and offense.
Then Leo represents stagnation and defense.
Leo has absolutely no self-intrest, no desire of his own. He simply wishes for the world to stabilize under the watch of the Harwey family.
He seeks the Holy Grail not for greater power but to realize certain stability in the world.
If the Holy Grail ends up in the hands of someone other than himself, the current tumultuous events and conflict around the world that would otherwise be fixed and cleaned up in ten years, will instead take twenty.
…Even if another Master that was dispatched to the Moon by the West Europe Plutocracy were to win, because the Holy Grail is a power of national scale that’s obtained by an individual, it will become the kindling of conflict.
In order to prevent that possible future from being realized, Leo himself decided to go to the Moon as a Master.

“Humanity will only exhaust itself if it just continues to undergo change without solving the underlying problems. From now on, before the world completely stagnates, it will doubtless be my task to search out a new path for mankind.”

Said Leo.
Tohsaka Rin’s contention that “the current structure of the West Europe Plutocracy is just wrong” is something that Leo has already long pondered.
Leo can see the end result of the path that humanity is on, and he is working so that mankind will be able to continue to exist after it’s downfall.
Rin can also see the end result of the path that humanity is on, but she is struggling to change that path so that mankind as it is doesn’t have to be met with ruin.
Leo thinks that humanity’s continued existence is what needs to be priorirtized, and he does not prioritize the continued rule of the Harwey Family.
His ultimate goal in seeking the Holy Grail is to allow people to live in safety and comfort, to guarantee the next millennium of continued human existence.
However, Leo doesn’t know the feelings of the unprivileged, nor the human emotion felt when one experiences defeat or loss, nor fear. So Leo’s mind is never stimulated to conceive the feeling that he might be facing a loss.
He will eventually come to know how unnatural and crooked this is for a human being.
His way of accepting everything the way it is, even in his final moments, prevented him from ever feeling the onset of an emotion that makes up a key part of the essence of life; human desire to fight back in the face of adversity.

Leo is also a Master that appears in CCC.
Like Rin and Rani, he falls to the far side of the Moon at the end of the fifth round.
Although his memories are sealed, even BB was unable to brainwash him, so she trapped him in the old school building. (He is simply unable to leave the building.)
Leo creates the Student Council, and supports the protagonist in every way possible.
Even though Leo knows his memories have been sealed away, he is still optimistic, “Well if you think about it, it’s a wonderful opportunity, and it seems pretty fun, so let’s keep at it like this!”
Although Leo learns he is not perfect after being defeated by the protagonist in EXTRA, and thereby becomes a true king, he is fated to perish in that very instant.
The young King, who had been unable to even converse with the protagonist in EXTRA due to the great difference in values, finally experienced some of the fun of being a kid on the far side of the Moon in CCC.
By the way, Leo addresses everyone using honorifics except AIs and artificially created life. His attitude toward Sakura and Rani may seem to be cold, but Leo is just earnestly interacting with them while at the same time accepting the way they are. 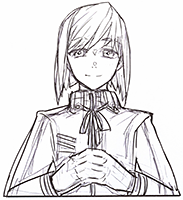