God is Here With Me. Ruler’s Noble Phantasm. By brandishing her holy flag, she can convert her EX rank Magic Resistance skill into an equally powerful defense that blocks all physical attacks. It is the crystallization of the legend of Jeanne d’Arc waving her flag on the battlefield and fighting to the very end with hardly any wounds.
However, each time she uses it, she accumulates damages, so naturally she can’t withstand an Anti-Fortress Noble Phantasm multiple times in a row. Also, only Heroic Spirits who had witnessed Jeanne’s legend in life—in other words, only Gilles, in his past form as a Marshal of France, can use this Noble Phantasm besides Jeanne.
There are various theories about the flag’s design, with many popular suggestions featuring angels or flowers (specifically, the iris flower). Incidentally, Jeanne uses this flag mostly to attack in battle. “There’s a spear-point at the tip, so it’s a divine sign that this flag should be used to strike the enemy,” is what she says as an excuse each time one of the Servants she passes judgement on protests about it. Please stop. 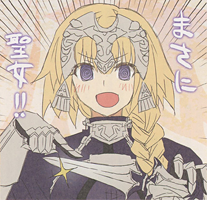