Julian’s father.
In the successive heads of the Ainsworth which will be replaced by Darius there is a weak inclination towards both vitality and passion. Among them, Zachary was an unusually “enthusiastic” man. He openly showed a quiet and prudent appearance, but the flames burning inside never went out.
The name of those flames was justice. He seriously believed in the appellation to the salvation of mankind heralded by the Ainsworths. No matter what sacrifices had to be made, even if mankind transformed into something else, he sincerely believed that saving it had been the dearest wish of his family for a thousand years.
…That’s why he was able to notice Darius’ sense of discomfort.

Before being replaced by Darius he displaced a fragment of his own personality into a doll. In order to supervise Darius. Or to protect his children. But, regarding personality displacements in which a mental deficiency already occurs, moreover a displacement of a fragmented personality is not an easy thing. As a result, he became a puppet quite unlike the old Zachary that didn’t talk or move.
In the Fifth Holy Grail War, he was reduced to a pawn for his son Julian. Zachary, who recognized Shirou as an “enemy to the Ainsworths,” attacked Shirou with a tremendous spirit. That fierceness was the manifestation of the flames burning inside him. It was at the verge of death when he realized that he had mistaken the opponent towards who he should point his blade at.
By the way, at the moment he gave the most superior Card to the father, and the strongest Card to the elder sister, don’t you feel Julian’s conflict and naivety? 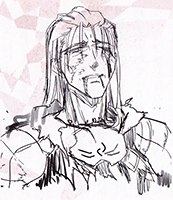