Does the G stand for Giant? Great? Or how about Gargantuan? In any case, she is BIG. You can’t say she doesn’t have a chest anymore. Despite having no facial expressions as tells for her attacks, you can read her arm movements easy enough, but sometimes she shoots lasers from her eyes… which may remind you of the last boss of a certain game from Watanabe’s game outfit. 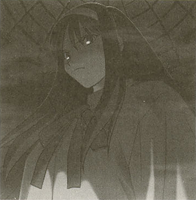 The local specialty (?) of Melty Blood, and the Tatari’s greatest (largest) nightmare. Miss Akiha, after being enlarged by the miraculous chemical substance Makikyuu X. It might seem like a contradiction, but she’s still “small” despite being so big…!
She can use her giant fists to execute a hammer crush attack, and comes fully equipped with eye beams and a drill arm. If missiles fired out of the lobby walls, she would be absolutely perfect.
…That said, at the time there was an outcry that we had gone too far, and half the Akiha-lovers scolded us over it. Eheheh. Reflecting on it now, I can see what they meant, though. Back then, Kagetsu Tohya had just come out, which was mostly comedy, so the writer probably still had a few screws loose from that. Yes, yes, that must be it. If he had taken the time to calm down and think about it, he definitely would have realized it should have been G-Ciel instead…! (No, that’s wrong.)
At any rate, when we first conceived of this, it was just a simple boss character version of Akiha with her pixels doubled. See, it was the writer’s wish that Melty Blood have five final stages, and that each one have a different boss character. However, drawing up pixel art for five whole unique boss characters proved to be too daunting, and in the end we decided to settle for using boss characters that were just tweaked versions of the characters that already existed.
But, the Watanabe Seisakusho staff took that feeble idea and seriously ran with it. “If we’re going to do this, might as well do something apocalyptic with it.” Given that the writer is infatuated with apocalypses, how could he say no?
Oh well, this sort of random craziness is what makes Melty Blood what it is. And you know, if we can get away with this “G” nonsense, that means next time we can pretty much do whatever we want!