Jinan Sougen’s only daughter.
Despite her warm and cozy atmosphere, she is actually a foxy seductress who targets younger men.
She is Kohaku’s elder fellow pupil in pharmacology, and an expert in acupuncture. She’s even stood in for her father and medically examined Shiki’s body before, so it goes without saying that their relationship was not an ordinary one.
She only showed up for a split second in Kagetsu Tohya, but she still managed to stir up some trouble. It may be that she was destined to become a schemer the very instant she became a pupil alongside Kohaku.
She is a devilish woman, who ruins men. Or rather, the man she marries will undoubtedly be content with his life, but also utterly unable to function as a human being without her. Mmm, well, it may not be what he always dreamed of, but as long as he’s happy it should be okay, right? 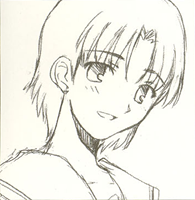