Her former name was Sion Eltnam Sokaris. She is the heroine of Melty Blood. She is an alchemist of Atlas, and expertly uses her etherlite filament to freely read the thoughts of others. Despite being an alchemist she possesses envious level of physical prowess, which rivals or surpasses that of a Dead Apostle. When led astray by TATARI (Night of Wallachia) in the past, she was saved by Riesbyfe Stridberg. She says that she is conducting research on how to return Dead Apostles to being human, but…

An Atlas alchemist who came to Misaki in order to put an end to the Tatari.
Her weapons are Etherlite (a nano-scale filament) and the Barrel Replica (an imitation of the “Black Barrel”).
Even within Atlas, she is one of the most promising up and coming alchemists, and the name Atlasia marks her as the Institute’s next director.
She participated in the battle against the Tatari three years ago, but was defeated. Though she was the sole survivor, afterward she began pursuing the Tatari on her own without returning to either Atlas or the Church.
She has an overly serious and inflexible personality, but deep down she’s a warmhearted genius scholar. Among the constantly feuding Tsukihime heroines, she’s a rare type capable of getting along with everybody.

Bestowed with the name Atlasia; she is designated as the next director of the Atlas Institute. Finds fault in her own way of life, but has difficulty placing a finger on what troubles her. Participated in the operation to take out TATARI; but was met with defeat and inadvertently became part Dead Apostle. Shook off her pursuers. Roams the city at night with Ries and Satsuki. 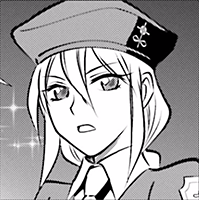