A Master of the “Black” camp. The one who stands at the top of Yggdmillennia. He has the highest rank of Grand, but this is an unusual occurrence that only happened in the Apocrypha world. This is because the number of magi in the Apo world is sharply dropping due to so many subspecies Holy Grail Wars having occurred. As a consequence of this, almost all the magi who have survived them have slid up one rank higher than their original rank. Darnic, who is at Pride rank, didn’t let this chance slip away and used his skilled forked-tongue to reach “the Grand rank as an honorary position different from the proper Grand rank in commemoration of his achievements to the Association, even though ability-wise he is not at Grand rank.” What’s with this trend that’s like chilly oil which was popular for a certain time? …It’s only natural, though, since old man Darnic’s Grand rank isn’t something that a true Grand-ranked magus would ever acknowledge.
Darnic himself wasn’t especially concerned with the honor or fame either. He only sought it out because he simply deemed that possessing the Grand rank would be more advantageous for him when acting independently.
However, that doesn’t make Darnic weak; rather, it’s the exact opposite. Fiore also possesses noticeable talent, but she can’t compare to Darnic in terms of tenacity, talent and experience together as a whole. In a normal Holy Grail War or a battle between magi, Darnic would definitely be the winner. The Master of the “Red” Camp might be able to beat him if they cooperated together, but even that is an uncertainty.
He mainly researched human souls and even managed to succeed in fusing with the soul of a Heroic Spirit in the end. Of course, it was an emergency measure, and his true final goal with it was to raise the accuracy and precision as much as possible and create a “magus who possesses the power of a Heroic Spirit while maintaining the mind of Darnic.”
Also, he is first-class as a magus, but he is first-class as a politician as well. There is an American term used to mock lawyers called Ambulance Chasers, those who follow ambulances and try to get victims to make a lawsuit, but Yggdmillennia was similar to that as well. Apparently, Darnic immediately brought magi who had been crushed in the subspecies Holy Grail wars into his faction and steadily increased the clan’s power and influence behind closed doors.
He isn’t the type of person to extend great effort by choice, but you can glimpse his extraordinary vindictiveness in the way he worked to bring about his revenge for being belittled over the course of many decades. He also feels some slight sympathy for his clan as the head of Yggdmillennia, so the “tenacity of magi who have been driven away to the far corners of the world” may have accumulated within Darnic as a result.
If he never managed to get a hold of the Holy Grail and had simply lived as an ordinary magus, the personality of “Darnic Prestone” would have completely diluted away after living for two hundred years, until only a steel-like magus with the name “Yggdmillennia” was left.
…Even if that happened, Darnic wouldn’t have hesitated in following that path as long as he was able to get closer to the Root as a result. However, would the “personality of Darnic who was diluted away by a massive quantity of souls” have been alive or dead at that point, and would Darnic have been happy even if he managed to reach the Root after all that? That is something he never knew.
Incidentally, he apparently went through a quite a fierce battle against old man Matou during the Third Holy Grail War. 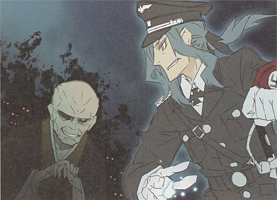