Alternate name: Tohsaka ATM.
It is a money collection system by Rin, from Rin, for Rin.
It is a loop system created solely for the reason of snatching sakurament1 from the protagonist.
Anyone who is caught in this loop ends up at a workplace that Rin created, and they must then work for Rin and present Rin with all the money they earn in order to increase her savings.
To begin with, the first layer [in CCC] is Rin’s heart, and within it resides the contradictory desire to “make money.”
The Attack Programs are created from crumbling bits of Rin’s heart. When you destroy an Attack Program it turns into sakurament, which was originally the “Savings of Rin’s heart.”
No matter how many Attack Programs the protagonist defeats, they all turn into sakurament which is then deposited into the Tohsaka ATM, however in spite of that the total amount of sakurament that Rin has available to her will not change in the slightest.
This is because the amount of money that Rin desires already lies within her.
Without realizing this contradiction, we see Ego Rin2 continuing on with her usual behavior.
In reality it’s hard to tell if she actually wants money or if she just wants people to listen to her selfish demands.
You might unexpectedly find yourself triggering affection flags when you obey her orders and work for the great Queen of the Moon.
In that respect, the work is indeed valuable.
The correct decision is to go and defeat the Attack Programs without being lazy. It’s not good to immediately give up and rely on the Harwey Ten-Ten Loan System.3 By the way, you can actually still defeat the boss even if you don’t deposit the required amount of money. If you try depositing less than the Queen demands her reaction is also quite interesting. 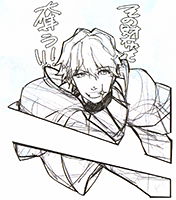