One of the homunculi created by Gordes. Though her Magic Circuits are meager, she excels in fighting ability and inspiration, so she was selected as a commander. Just as told in the novels, battle-type homunculi have extremely short lifespans, with a limit of two to three months of life.
For a homunculus, she has a neat and lively personality. If we were describing her using visual novel or light novel terminology, then she would be the “female teacher-type who has sex appeal, but is unfortunately coarse and ill-mannered.”
At Gordes’ request, she has taken charge of thoroughly beating up his son. Naturally, his wife protested when their son was beat up, so Tool beat her up and beat up Gordes too while she was at it, winning supremacy over their family. It is said that, for three months, this homunculus stood at the top of the Musik family. 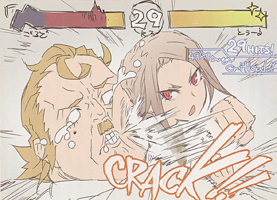