The first big boss in CCC.
The Queen of the Moon employs Red Lancer, as well as the Sentinels from the labyrinth who made the protagonist laug— err, who made the protagonist suffer.
Her real identity turned out to be, who would guess… Tohsaka Rin. Wow. (monotone voice)
Despite having half of her consciousness occupied by BB, Rin manages to behave like her usual self. This is certainly a testament to the strength of her will power.
To digress, when we decided that Rin would appear as the Queen of the Moon, she was supposed to get a special and rather risqué punk fashion outfit, and its design progressed to the point where Wada1 had done some rough drawings, but sadly, sadly, so sadly it was axed. 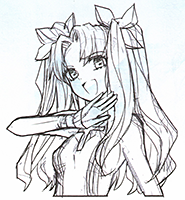