These are the statues of young females that block the end area of each layer.
They are the true form of the girls who have been transformed into Sentinels, and thus they are each part of the Labyrinth core.
In the game they are called “relief.” The statues basically have the girls entrapped inside the walls.
They are supposed to be “the border of the world” impervious to physical attacks.
Even BB can’t enter the territory held inside them.
BB assumed that even if the protagonist and company made it through Sakura Labyrinth, if they were blocked by these impenetrable statues, they wouldn’t be able to do anything.
However, using the secret technique developed by Kiara, the protagonist was able to jump over the border into the statue interior, and so the invincible Sentinel System’s last line of defense fell.
By the way, the massive avatars of the statues that are half buried in the wall are the result of being connected to BB’s expanded memory. It is needed in order to freely make modifications to the Sakura Labyrinth.
Once you get inside the statue, defeat the Sentinel, clean their heart of contamination, and free them from BB’s control (by severing their connection to BB), they will return to their original size.
Their name in the early designs was “Chocolate Veil.”
The inside of the statue is somewhat different from the “relief” of a Servant’s inner-heart world, which is more like something deep rooted in one’s heart, an existence similar to the “shape of one’s soul.” 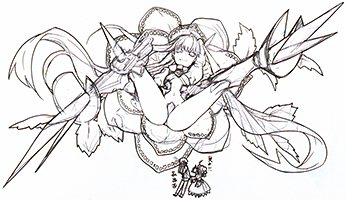