Sword of Promised Victory.
Sword of light. It is not a man-made weapon, but rather a divine construct tempered by the planet. It is the Noble Phantasm standing at the very pinnacle of holy swords.
The strongest illusion (Last Phantasm), crystallized and refined from the wishes of humanity stored in the planet.
Though it was entrusted to elementals, who act as the planet’s sense of touch, it temporarily passed into the hands of a human king for a time.
Because it is so recognizable as the symbol of King Arthur, Saber had no choice but to keep it hidden while she fought.
But despite the fact that it’s a Noble Phantasm that’s almost synonymous with Saber herself, the number of times she actually uses it can be counted on two hands.
That is, three times in the Saber route, once in the Rin route, and twice in the Sakura route.
Because it is too powerful, it cannot be used carelessly at ground level.
Whether it be dark or light, it could be argued that Excalibur’s clash with Rider’s Bellerophon is Fate/stay night’s grandest splendor.

1
Excalibur is Saber’s ultimate weapon, the sword said to have been bestowed on King Arthur by the Lady of the Lake. It is a Rank A++ anti-fortress Noble Phantasm. Excalibur is a divine construct forged by the planet as the crystallization of the wishes of mankind for how they want the world to be. Refined and perfected within the planet itself, it is the “Strongest Illusion” (Last Phantasm). Excalibur transforms its wielder’s magical energy into light, emitting an all-destroying beam of converging, accelerating light from the tip of the sword. Its overbearing strength massively affects the surrounding area, which limits how (where) it can be used. It also consumes significant magical energy. 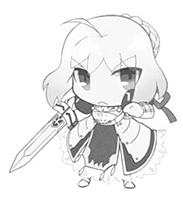 Fate/Zero Animation Guide I: Glossary of the holy grail war I
§
noble phantasm

1
A Rank A++ Anti-Fortress Noble Phantasm that emits an all-destroying beam of energy rivaling Saber’s total magical energy. Being sung as “humanity’s most revered” even in the hellish extremes of a battlefield, shining brightly as the crystallization of everything imaginable in the hearts of those who have passed. Because its use requires swinging with both hands, Lancer intentially breaks his Gáe Buidhe to release Saber’s left hand from its curse. The resulting blow from Excalibur that was released is a torrent of light that destroys the giant sea demon.