Elizabeth shows up in CCC as an if Lancer1.
The Master who summons her is Run Ru.
It’s not clear if she is Run Ru’s original Servant, or if she took the place of Black Lancer through the events of CCC (at the branching point in the elevator a bit after the start of the game).
All we know is that in the timeline where BB exists, Run Ru’s Servant is not Vlad III, but rather this young girl.
Her true name is that of a historical woman who was a mass serial killer and torturer, Elizabeth Bathory.
As a Servant she is summoned with the body and appearance she had during her golden days, which were the days when she found herself to be most beautiful. Summoned as a Heroic Spirit as she was before her marriage and with her body and character being that of when she was 14.
As her 14 year old self she retains only two things. First, her dreams of love and the romance oriented mentality she had before her marriage. Second, memories about the nightmare that was her imprisonment as an evil creature shortly before her death.
Because of this, her existence as a Servant is a confusing mix of her time as a young noble lady, and the time she was assaulted by that crazed nightmare.
Wearing a cyber-goth-loli dress,
she has immoral devil horns (actually dragon horns),
and the protruding fangs of a little devil (actually dragon fangs),
and a lance that can double as a microphone stand.
Her design doesn’t seem to reflect her as a proper Heroic Spirit.
She is a self-appointed “Idol Servant.”
Although treated coldy by those around her, Elizabeth is always serious about perfectly acting as an idol using both mind and body.
She refers to herself using the personal pronoun 私 (watashi), while referring to other people in a derogatory fashion such as “pig,” “squirrel,” “rabbit,” and names of other inferior animals.
Her use of words is generally like that of a noble person, however from time to time she mixes in some slang used by modern high school girls.
She says a lot of things that makes it seems like she enjoys tormenting the people around her, but rather than simply being extremely sadistic, she’s more of an innocent pure sadist. While BB enjoys making fun of the protagonist, Elizabeth doesn’t even see her opponents as similarly living beings.
(Her sadistic behavior is just one way to express love, a kind of feeling where the “sadistic desire to kill” is transformed into “sadism that’s born from love”).
Her alignment is chaotic evil.
Outgoing, strong spirited, proactive.
She values narcissism above all.
High class, yet always with the high-horsed idol attitude. She is cruel and cold.
Completely unable to understand the pain of others, mentally handicapped in that only after seeing someone in pain does she recognize “this creature is human.”
She may seem sadistic, but to her harming and causing pain to others is no different from breathing.
To Elizabeth, inducing the suffering of humans (who are all lower level creatures than herself) is her duty and responsibility.
She is an incarnation of nobility, and seriously carries out her responsibility to rule and manage the masses. From this perspective she is very diligent and responsible towards her work.
The problem is that to her, ruling and managing the masses means nothing more than their torture.

“The Holy Grail and the human race have nothing to do with me.
I wouldn’t even care a bit if civilization were completely destroyed. There’s only one thing that’s important. And that’s me! That I’m more beautiful than anyone else for all of eternity!
You understand, right? Why don’t you all go die like the pigs you are? The only thing you could ever be good for is dying so I can bathe in your blood, you useless slaves!”

When Elizabeth was alive she was extremely attached to her own beauty, and taking this to the extreme is what brought her to carry out immoral and criminal actions.
She would steal away people’s daughters, and after plenty of torture, she would slaughter them. It’s said that she bathed in a bath filled to the brim with the blood of young girls as a way to preserve her youth.
To Elizabeth, her own beauty was an undisputed matter of course. In order to preserve her beauty, anything was permitted, no matter how heinous the action may be. Any action carried out to preserve her beauty was just part of the natural way things should be.
Although she is often misunderstood as someone who killed for pleasure, Elizabeth never took pleasure in killing. She simply took the rage she felt from her body that was slowly becoming ugly and inferior, and transferred it into the bodies of people living in her land.
Trembling in joy and excitement for the first time and exclaiming “This is the best!” was something that she only came to know after becoming a Servant, learning about the “Japanese idol” job.
Since then, she completely devoted herself to becoming the greatest and strongest idol. Her biggest rival is Red Saber.
Only after Elizabeth became a Servant did she first experience the girlish happiness and fun of having a rival.
One thing to note is that because she had no interest in anything other than her own beauty, sexual knowledge and experience is completely alien to her.
To Elizabeth men are no more than servants and a source of gifts, and can appear cute sometimes (those who adored her beauty and meeting a bad end). They are nothing more than pigs.
On the other hand, women are slaves, mother, and lovers, they are raw materials to help preserve her beauty. They are nothing more than food to sate her appetite.
In CCC the female ego is a main theme, and here we have highlighted “the stubbornness a woman holds about her appearance.”
The BBs are focused on the feelings that a girl has for their lover,
the feelings of a certain perverted devil is directed towards the world,
but only Elizabeth is focused solely on her own happiness. Although Elizabeth is responsible for carrying out cruel physical punishment, she has not once encountered sexual pleasure. This goes to show how pure she is.

Also, like Vlad III, through the skill “Innocent Monster” she is slowly transforming into a monster.
Her horns are not the horns of a devil, but the horns of a dragon.
Actually part of her body (around her tailbone) is covered in scales. If seen she becomes extremely embarrassed and her face turns bright red, after that the person who saw her scales will face the romantic-comedy-like choice of being killed by her or marrying her.
The following is an inside story. Towards the end of CCC Rin talks about how “Lancer’s negative karma is decreasing.” However this is not because she has committed any good deeds.
Simply, by supporting the protagonist, the actions of Elizabeth end up saving more people than she killed when she was alive. This kind of judgement is just like something the emotionless Moon Cell would make.
Thus although her negative karma decreases to a point where she becomes free, the weight of her sins will remain forever unchanged. 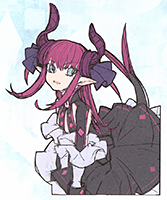