Also known as Adashino Kurou.
His elemental affinity was originally Earth, but was changed by his experience in the Land of the Fairies.
In this work, he stands as the greatest rival of El-Melloi II. Or one could call him El-Melloi II’s shadow. While El-Melloi II could be characterized as one so lacking in talent he is always being saved by his students, Heartless can be characterized by one who is so peerless in ability that he was inevitably betrayed by his students.
The magecraft he uses is wide and varied.
The Faculty of Modern Magecraft didn’t have much in the way of family lines, and so worked to preserve numerous forms of magecraft of relatively shallow histories. Heartless’ area of study was each and every one of those. Though it is hard to say how much he was aware of it, due to a certain kind of time paradox, having lead the dual lives of Adashino Kurou and Heartless had a large influence on him.
Adashino Kurou received all kinds of guidance from his future self, Heartless, causing his abilities to grow at an unprecedented rate. To those around him, it seemed like the pouring of water from one bottle into another, but there was nothing supernatural about it. In reality, his future self knew his own nature and thought process so well that he could provide the perfect teaching and guidance for him, thus transferring all of his skills.
…in short, it was an homage to a certain Archer and his relationship with Emiya Shirou in the Fifth Holy Grail War.
His ability to completely flip his heart was, as El-Melloi II recognized, not an ability so much as it was a defect. His heart, left behind in the Land of the Fairies, once connected to the body that was now like an empty shell, made a kind of pseudo-teleportation possible for him, an ability encroaching on the domain of True Magic. However, it was an act similar to inserting a scalpel into one’s heart and flipping it over.
In the Rail Zeppelin incident, he casually opened his heart twice, but in reality his back was really up against the wall.
He was the bearer of Mystic Eyes that could steal and take over the vision of others, the Mystic Eyes of the Usurper.
Originally, they were similar to the Mystic Eyes of Finding, only able to find lost things that they were specifically paired with — rare to be sure, but all in all rather low level as far as Mystic Eyes are concerned. However, due to his time spent in the Land of the Fairies, they transformed into “Mystic Eyes that could steal even the vision from Mystic Eyes.”

During the story, he spent ten years on his plan to turn the world of magecraft on its head.
This was not because of some anger at Kurou’s friends among the survivors (or his four students, from Heartless’ perspective) betraying him. Having experienced that betrayal twice after jumping through time, he considered that situation to be “a simple result of karma.”
Water flows from high to low. Things burned turn to ash.
As such, if the system itself never changes, the same things will happen over and over for all eternity. That was why he left behind his position as head of the Faculty of Modern Magecraft and, using every method imaginable, sought to upend the world of magecraft known to the Clock Tower.
In this case, the first thing he needed was information to overwhelm the other magi.
Carefully picking his allies, he ended up joining forces with Lord Marisbury of the Faculty of Astrology, secretly orchestrating the Mystic Eye Bearer Serial Killings seven years prior. After acquiring numerous sets of Mystic Eyes by doing so, Heartless learned of the truth of the Holy Grail War that the Clock Tower failed to consider seriously, and at the same time decided to keep that information hidden.
As a result, Marisbury also recognized that the Holy Grail War wouldn’t be able to satisfy his objectives, and he put an end to his own plans…but that is another story.
At any rate, Heartless, knowing about the truth of the Fourth Holy Grail War and the existence of Servants, moved on to the next step of his plan. In short, through the use of the Divine Spirit Iskandar, the plan for the revival of the magecraft from the Age of Gods. The conspiracies of the Clock Tower were nothing more than scrabbling over Mysteries that were already in decline. So, it was better to return to the Age of Gods, where such intrigue was unnecessary, he thought.

As an aside, his partnership with Faker was an enjoyable one for him.
Within his life, where he had already predicted his own betrayal, the companionship of Faker who was raging at being betrayed by the Ionian Hetairoi was something he could accept without consideration. In most cases the relationship between Master and Servant is riddled with tension, but regardless of Faker’s opinion of Heartless, Heartless’ opinion of Faker was that he could rest assured in their partnership.
Part of the reason much of the malice in Faker’s personality seemed to disappear in Grand Roll was no doubt because of Heartless’ attitude in that respect. Between the times of the Rail Zeppelin and Grand Roll incidents, the pair of them got involved in numerous incidents beyond the knowledge of El-Melloi II. Through it all, Heartless always seemed to be strangely enjoying himslf, an attitude that always brought a frown and a “what’s with this guy?” from Faker.
In comparison to the rest of his unfortunate life, the last two months of his plan to upend the world of magecraft were, despite the tremendous upheavel, incredibly calm. 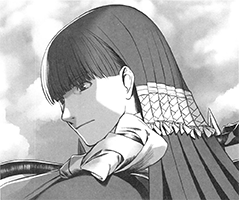