A Master of the “Black” camp, and a member of the Yggdmillennia clan. He comes from the Forvedge family. He specializes in summoning low-class spirits, insects and animals. Fiore was born with exceptional Magic Circuits that appear in someone only once in a hundred years, but since it was uncertain whether the paralysis of her legs could be cured, the present head of the Forvedge family had his wife give birth to Caules as both a spare successor and a caretaker for Fiore.
Unfortunately, a miracle didn’t occur a second time, and when he saw Caules’ mediocrity that embodied the decline of the Forvedge family, the family head decided that Fiore should be made the successor even if her legs didn’t function and ordered Caules to be her caretaker.
Caules himself studied magecraft while half-resigning himself to a carefree life. But as time went on, he began to feel a slight sense of impending crisis not only in Fiore, but the entire Forvedge family. It was fine for their parents to thoroughly drive the teachings of magecraft into Fiore by personally educating her, but as a result, Fiore ended up growing up as an unfortunate young lady who did not know a single thing outside of magecraft…!
Therefore, the only thing he could do was meddle in his older sister’s affairs as a helpful younger brother. Even during the Holy Grail War, he went with Fiore to Romania as her backup. There, Command Spells appeared on him and he ended up being made in charge of Berserker.
He essentially followed the creed that magecraft is an accessory to human life, and he had not the slightest intention to devote his entire life to magecraft. But, his slightly pessimistic way of thinking seems to have greatly changed over of the course of the Great Holy Grail War. His way of thinking is simple and dry, and if he were to have faced his sister in a regular Holy Grail War, Fiore would have forever despaired after killing him, but Caules would have resolved himself after having first despaired and unhesitatingly killed her. In other words, his consciousness as a magus is greater than Fiore in a certain sense.
At the same time, Caules also has abundant present-day knowledge, and he was the one to teach Fiore about cell phones. By daring to rely on technology, he gained some leeway and flexibility in that area, and he tried to expand his poor specs as a magus even slightly. Though he has much more leeway after having the family’s Magic Crest transplanted in him, he is still far from being a first-class magus.
After the Great Holy Grail War, he spent his days in shame while being watched by the Mage’s Association in London… However, one day, Caules had his class changed with a single phrase by a certain long-haired and mean-eyed person with a very high position, who told him, “Why are you studying this kind of magecraft which doesn’t suit you? Your talent is much more suited to this, you know?,” and before he realized it, he was surrounded by classmates who were dangerous in terms of both talent and personality while he was still in a daze.
“No way, I want to live a normal and mediocre life. I don’t want to get involved with these people.” Dear Caules-kun thought this while sighing softly as he gave a sidelong glance at the optimistic and thoughtless genius who was making a ruckus in a nearby seat.
…It seems that that person will be making an appearance in a different work soon, but don’t mind, don’t mind. 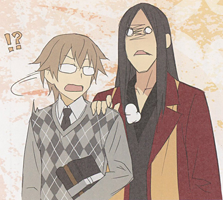