The hero(ine) of the story. The closest disciple of El-Melloi II.
Taking the detective novel role of Watson, she was pretty much the first character designed for the series. Case Files changed dramatically over the course of its early development, but she alone survived the process mostly unchanged. “A girl who excelled as a gravekeeper, but was afraid of ghosts. And the Noble Phantasm she holds is King Arthur’s…” Such was her catch copy.
While there was originally some distance between her and El-Melloi II, the decision to have their relationship gradually deepen was decided at the same time it was decided to make Case Files a series. Making El-Melloi II an important person for her, not as a romantic partner but as a teacher, was also decided at that time. She certainly came a long way since calling him nasty in the first volume.
Furthermore, while El-Melloi II proposed that she was “likely a descendant of a distant relative of King Arthur” in the first volume, while that wasn’t just a handwave explanation at all, it would be more correct to say she belonged to a family which was imprinted with the essence of King Arthur. Gray’s family possessed the essence of King Arthur’s physical body, while the Corpse King had the essence of King Arthur’s spirit planted within it, sleeping until the time when the Corpse King should come.
Ten years prior, her appearance suddenly transformed, at the same time that Saber (Artoria) was summoned in the Fourth Holy Grail War. At that time, in response to the awakening of that essence, Add’s personality also activated, but in exchange Gray lost her other friends. To the people of her hometown, she had become an object of worship. For that reason, when El-Melloi II was scared by seeing her face for the first time, she took an interest in him, deciding to accompany him.
Gray most definitely doesn’t hate her current face. But, the idea of it changing scares her. Her lone friend is one that awoke due to her transformation. In that case, did that mean her existence had any value? Shouldn’t she just allow herself to completely become that past hero?
And in the Grand Roll case, as the Servant Saber was summoned once more in the Far East, her body would transform once again.

As a disciple, Gray is extremely devote.
Though saying that, for someone used to the austere lifestyle of a gravekeeper, her current life feels rather lax to her. Being left entirely to her own devices when she wasn’t doing work for El-Melloi II, the first two months had her in a state of bewilderment. Of course she had effectively none of the basic knowledge expected of a magus, so her adaptation to the El-Melloi Classroom has been largely a result of cooperation from Flat and Reines. Svin was basically like that from the moment he first met her, so there was no cooperation there.
“You’re always taking care of my brother, so isn’t there something we can do for you in return?”
“Not really, but…”
“But?”
“If…if it’s okay, just for a little longer, if I could keep things like this…”
Standing in front of the fireplace, with a sad smile, Reines suddenly offered her a new kind of sweet to try. Or something like that.
By the way, as far as English spelling, her name could be spelled either “Gray” as in American English, or “Grey” as in British English, and I struggled for a time to decide which would be appropriate. Since she wasn’t born in either country, and I heard that “gray” is perceived in both countries as being halfway between black and white, while “grey” is a paler color, I decided on the American spelling (to emphasize being in the middle of black and white). 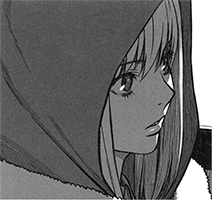