Meltlilith is the Alter Ego of pleasure.
She is a young girl that leaves a strong impression with her feet as sharp as swords and slender body.
She is a High Level AI created from a piece of BB’s heart.
She is classified as a High Servant, and was created by cutting and pasting together pieces of Goddess type Servants.
Merciless, aggressive, and sadistic, she is CCC’s leading Queen character.
She favors structural beauty, and refuses to forgive anything less.
To Meltlilith, anyone other than the protagonist is no more than rubbish in the gutter.
Meltlilith makes it her goal to bestow the greatest pleasure possible upon the protagonist, and she is even prepared to rebel against her creator BB if necessary to achieve this.
However, that “pleasure” she plans on bestowing amounts to a monumental disaster of greater proportions that BB, and is certainly not something the protagonist would ever want to experience.

Her id_es skill is “All Drain.”
Although Meltlilith can’t completely absorb enemies into herself the way that BB can, Meltlilith can melt enemies into a pure energy form and then absorb them as XP.
Meltlilith has used All Drain to increase her level to the maximum.
If she only has Kingprotea’s “Huge Scale” skill (effectively removes level cap), she would have become the most terrible of monsters even surpassing BB.
Meltlilith refers to herself as “The Honey Queen,” she has various skills to drain her opponents.
In the game she appears as a speedster that whizzes around using ballet as a motif for her combat style. She uses her dance to run the protagonist down.
She is an incarnation of maternal instinct that goes about melting and absorbing everything in the world in order to create a world where only she and the protagonist are left.

Meltlilith was made from three Goddesses.
The first is the pure-hearted Greek Goddess of virginity, Artemis.
The second is a Goddess that appears in the Old Testament, Leviathan. Or perhaps the Rod of Asclepius version that is based on Ugaritic (Semitic) mythology, where she is known as Litan.
The third is the Hindu Goddess of rivers, Saraswati.
She has the power to manipulate anything that “flows.” Including natural phenomena, like wind or water, and also other things like music, speech, and prose.

She is not usually on good terms with Passionlip.
While they don’t hate each other, things just feel sour and out of place whenever they are together. They get irritated and it often seems like a fight could break out at any moment. Basically whenever then meet they just want to get their business done quickly so they can get away from each other.
This is completely instinctual, and the reasoning is the same as why BB dislikes the Alter Egos.
Despite this instinctual dislike, Meltlilith and Passionlip are conscious of the fact that they are sisters, and Meltlilith’s final words are addressed to Passionlip, who shared the same fate.
(On the other hand it might be that the incredibly self-centered Passionlip just thinks of Meltlilith as a nuisance and one-sidedly rejects her.)
In the initial game concept there was a combination attack where Passionlip would act as a launching pad for Meltlilith by holding her in the grasp of her claws, and then she would shoot Meltlilith out like a laser beam…
It was called Virgin Laser Palladion.

Melth Lilith is pretty pumped up about doing a combo move with Passionlip, but Passionlip is reluctant and just wants to get things over with as soon as possible.
Meltlilith always seems gets into these half-baked situations. 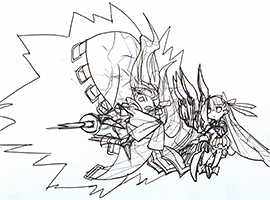