Rani the Eighth.
Rani is a Master in the Holy Grail War.
Her nationality is Egyptian. Her Servant is Berserker.
Her most impressionable features are her tan skin, white coat, purple hair and glasses.
She only seems slightly human, and expresses very little emotion. She is a young girl who is like a innocent doll.
Since she has so sense of “self” in combination with her lack of common sense, she is always on a different wavelength from the protagonist. Rani only values her creators orders.
She is the ultimate homunculus, and her specs (fundamental abilities) exceed Leo’s.
At her core is Hermes, which is a 6th generation spiritron computer that shouldn’t even be completed and exist in this world yet.
(Hermes is the crystallization of the Atlas Institute’s innermost secret techniques of fundamental Alchemy. We can assume that this is probably the Philosopher’s Stone.)

Rani is not human.
She is an alchemist of the Atlas Institute, and also a homunculus that was made by the head of the institute, Sialim Eltnam Re-Atlasia.
Rani the Eighth signifies “the eighth woman.”
She is different from the homunculus created through DNA engineering that are popular on the black market.
Rani’s design is based on old world magus theory, and she was made with cutting edge science and technology developed by the Atlas Institute. She was made as a magus so she could be sent to the cyber world. In short she is nothing short of being a new form of humankind.
By using nano-sized fibers called Etherlight, Rani can directly send herself into to the cyber world without any direct physical connection. Her computational power is equivalent to the power required to generate all of the Holy Grail War’s arena and schools. She can go head-to-head with the High Level AI who are in charge of managing the Holy Grail War.
You may think of Rani as an emotionless robot, but she far surpasses the abilities of regular humans, so of course she is equipped with emotions.
However, Rani’s creator never taught her about what emotions were for. Although she was going to teach her, she passed on to the next world only confirming that she had a “heart.” As she passed away, she left Rani with her final order: “Connect to Moon Cell, and if you deem it to be a thing that threatens the existence of humankind, destroy it.”
As such, Rani set out for the Moon and became a Master not yet knowing how to effectively use her “emotions.”
She set out knowing that what lay ahead for her meant she would never again be able to return home.

Rani also appears as a trustworthy Operator in CCC.
Just like the Queen of the Moon, at the end of the fifth round BB highjacks her consciousness, and then Rani is dropped to the far side of the Moon to become one of the enemies that the protagonist must fight.
The reason that BB made Rani the core of the second layer is because Rani is a similar entity to BB.
Rin is human, so she can’t be trusted [by BB], but Rani has logic circuits similar to BB’s, so BB gave her a more important position.
After losing to the protagonist, Rani parts ways with BB, surpressing the anger of “punishment,” she joins the student council as an operator.
A tan-colored ジョバ○二か, but she will compile most programs for you in one night.
She is the treasurer of the Students Council. She also provides some very useful support and guidance to help you clear Sakura Labyrinth.
Rani soon finds herself as good friends with Rin, who also provides you with in game advice and support. In the latter half of the game Rani is rather uncertain about various things, but she was finally been able to experience human friendship.

Atlas alchemist. She is an artificially created human (homunculus) created by Director Eltnam. The number in her name is a simple reference to “Female No. 8.” 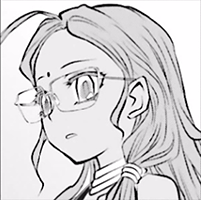