The Servants who experienced the bitterness of being discarded in the transition from the proto-version of Apocrypha featured in Complete material IV to the official light novels.
The one who disappeared first was Sakata Kintoki. As an enemy to the protagonist side, he’s a far too nice guy to fight, and as an ally, he’s very reliable. Furthermore, one aspect of the plot that was decided near the beginning was that “Frankenstein will use her Noble Phantasm and revive,” so Frankenstein had to take up the slot for the ally Berserker, causing Kintoki to be discarded. The next one to be cut was Musashibou Benkei. In his case, I briefly outlined him as a Servant who’s mentality was very complex which made him hard to act as a partner to a Master, but the Master-Servant pairs had already been decided and there was too little room for him to cut in. Most of all, there were three Lancers drafted in the first place, and the remaining two were Vlad III and Karna. The fact that he was a Japanese Servant also played a factor, so he was unfortunately retired from the running.
During this period of the plot creation, the following had already been basically decided: “Romanian stage. Vlad III’s big fame bonus. Central Servants are Jeanne and Astolfo, and the rival Servant is Amakusa Shirou Tokisada.” Therefore, the next one to be retired was Georgius. Since he would be the third saint in the story, he would have to be included in the ideological conflict between Jeanne and Amakusa, but I feared it would become too confusing. Also, considering the final outcome of the story, his value as a character dimmed further since his Noble Phantasm would cause the metamorphosis midway through the story, so he was discarded.
Now then, one of the two planned Riders has been discarded and left an empty Rider slot, so let’s think of possible choices. If possible, it should be someone really famous who wouldn’t be too intertwined with the main plot of the story… With that thinking, the candidate that came to mind was Achilles.
I want one more Servant suitable to act as a rival to Achilles on the opposing team from him. For example, how about his teacher Chiron? But in that case, one of the initially planned Archers would have to be discarded.
At this point, it was already decided that Atalanta would oppose Jeanne, so she had to be in the “Red” camp like Achilles. The remaining Archer was David. There was no problem with him as an ally character-wise, Vlad III was planned to be made the head of the “Black” camp. If there were another world-famous king on the same team as him, his relationship with Vlad would become complex… As such, David was the last one to be discarded.
This segment has already become very drawn-out, but, well, I have say to congratulations for them all getting to make a return in Fate/Grand Order… 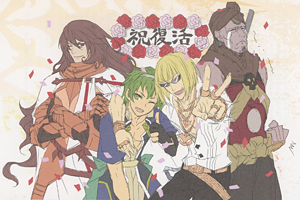