Waver Velvet, who appeared in Fate/Zero. This is him roughly ten years after those events. He was half-forced to inherit the title of El Melloi II by Reines and spend his days working hard to repay his debt and repair the family’s Magic Crest while teaching students as a professor.
To find out more about him, go check out “Character material.” Even in the Fate/Apocrypha world, he fought alongside Rider, Iskander, in a subspecies Holy Grail War against Kayneth—that’s the setting here, anyway.
After the end of the novels, Caules Forvedge Yggdmillennia also ends up joining El Melloi II’s class.

It goes without saying, the main character of this story.
His real name is Waver Velvet. One of the few survivors of the Fourth Holy Grail War.
His elemental affinity is Earth. His specialty in magecraft is Counteraction1. A destroyer of Mystery — though his talent for magecraft is mediocre, he was blessed with an incredible talent for deconstructing.
In reality, he doesn’t really possess all that much more knowledge than other magi. When he became the head of the Faculty of Modern Magecraft, he gained access to an incredible amount of materials, but with the amount of work he is saddled with, the amount of those materials he actually has time to study is limited.
His real talent is the speed and accuracy with which he can connect the people and events happening before him with his knowledge.
Just as Gray pointed out several times, rather than the Mystery or the incidents themselves, he looks more at the magi behind them. Why does such a Mystery exist? Why did they reach for such a Mystery? His eye for judgment is, in the end, reserved for judging people.
In particular, his impression that “this riddle is meaningless” that he expressed at the beginning of the Castle of Separation incident shows how well that ability of his was suited to that incident. In contrast, after the Rail Zeppelin incident, once he began pursuing Heartless, that same eye for judgment is what allowed Heartless to drag him along. Without cooperating with Heartless, the riddle couldn’t be solved — such a methodology was the perfect kind of hacking to use against El-Melloi II.
After the events of Case Files, in order to stop Gray’s transformation, he turned to the numerous thesis and essays left behind by his predecessor, Kayneth El-Melloi Archibald. As a result, he ended up reanalyzing and reclassifying the huge number of theories his predecessor had idly scribbled down…
And that was the beginning of the grimoire known as “Lord Kayneth’s Encyclopedia of Secret Arts,” which would someday be written. 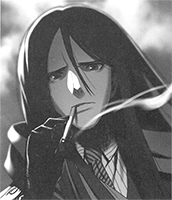