Daughter of the Edelfelt family, a distinguished lineage in the world of magi.
She is considered to be one of the most promising students currently studying at the Clock Tower.
With her refined manners, elegant speech, and swan-like beauty, she was the very model of a perfect young lady.
That is, until Tohsaka Rin appeared before her.
It’s said that like attracts like, but which one attracted the other is a total mystery. All that can be said for certain is that the two of them were far too similar.
And so, the perfect young lady Luvia (who had been successfully hiding her true nature up until then) met her rival. From that point on, every time they saw each other they inevitably ended up quarreling.
By the end of the year, there was an unspoken agreement within the mineralogy department to not even bother going to classes that the two of them were scheduled to attend at the same time.
Luvia specializes in jewel magecraft just like Rin, and is a master-level user of Gandr. Of course, that second one is only natural, given that she’s from Finland.
She is a true perfect superhuman, and behind her graceful exterior is a neat freak that hates losing. Honestly, it would be strange if she didn’t clash with Rin. After all, there’s no need for two suns in the same sky.
However, although she might be a bit cranky at having the disguise she wore for so long suddenly ripped away, she seems to be having fun passing the days away with Rin, so it’s probably alright.
Also, though she’s just a student herself, she found the dorms too cramped for her liking and bought a mansion to live in instead.

Pretty girl that somehow came out by accident in the end, No. 2.
Lately her position as a huge-breasted and rich character is in danger. Do your best and don’t lose, blue one.
But, isn’t a broke Luvia-san cute too?

The most elegant (hyena) in the world.
Daughter of the illustrious Edelfelt family of Finland. For each incident it was planned for one guest from other Type Moon works to be included, and though it was decided (by the author) in the same way to include her, she was the celebrated first guest.
Her elemental affinity is Earth. Unlike the Red Devil that is fated to come some day, she is not an Average One with an affinity for all five elements, but her ability to unleash a wide variety of magecraft through the use of a plethora of gems gives her a level of skill that is not at all inferior.
Apparently having little interest in the Clock Tower’s own ranking system, though she turns up for the El-Melloi Classroom and the Faculty of Mineralogy, she has no particular enthusiasm for the Clock Tower’s other political games.
For a girl who travels from her home base in Finland, plundering secrets and Mystic Codes from magi around the world, the internal conflict of the Clock Tower seems like little more than a storm in a teacup.
“Though I recognize authority and history, they are by no means absolute.”
Rather, she would likely adore a gentleman she could respect from among the Lords and Nobility. As such, Luvia has a deep-seated desire to support someone she can respect. To write it in a way players of CCC would understand, in short, SG1.
Though her too-perfect ringlets are entirely proof of her status as a tsundere, the dere side of her character has yet to make an appearance in Case Files. A tsundere isn’t made up of just one person, after all.
The Edelfelt family are a rarity among magus families, taking the name of Scales in that they produce a pair of twins in each generation that both become magi. As such, of course, Luvia has a younger twin sister. As the complete polar opposite of Luvia, she is an introvert with an elemental affinity of Fire. Her marriage has already been arranged, and it is a thing of mutual love.
In addition, though it never came up in the story as it wasn’t particularly relevant, the Command Spell used at the end of Grand Roll was actually one that should have been entrusted to the overseer of the Holy Grail War. In short, it was one secretly carried back to their home country by Luvia’s ancestor, who participated in the Third Holy Grail War. 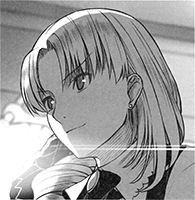