The head of the Atlas Institute.
Already having become a Dead Apostle, he has overcome the limit of his lifespan.
His number of and precision with Parallel Thought Processes are overwhelming even compared to other members of the Atlas Institute, as shown by his ability during the story to suppress the rampaging Logos React almost single handedly.
Completely separate from his pursuit of magecraft, he has an overwhelming love for theater.
Furthermore, he has a strong one-sided love for his daughter (or rather, a distant descendant of his from when he was human). Rumors have it that he adds to her trials out of a joy of seeing her under stress, but there are none who can confirm that.
Also, the name Atlasia is a title given to the head of the Atlas Institute. Before becoming the director, he had chosen the name Oberon.
In the world of magecraft, where a resemblance of names holds such a deep meaning, the relationship between him and the fairy king Oberon of a Midsummer Night’s Dream is a story only he knows. 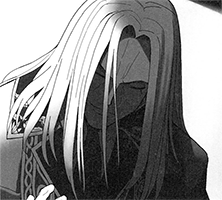