Miyu’s mother. Sakatsuki Hiyoko.
A name with a sort of good omen that has both the moon and the sun. “Hiyoko was the character that would become my mother (mama),” comments a passing by hypha-type.
After having given birth to Miyu away from the Sakatsuki household, she raised her almost on her own until the age of five. If the God Child obtained knowledge about this world, no one could know what kind of wish she will have. Therefore, under strict information restrictions, raising the child non-freely without making them think they are not free becomes an iron law. Being a child that doesn’t speak, move, or think is ideal. It’s a painful trial for the mother, but the mothers of the Sakatsuki family have fulfilled this job over generations. No, it’s not a job. The wise Hiyoko understood that that was an educational method unique of the family supported by a deep affection towards the child. Because she was raised that way by her mother as well.
Even so, she’s quite the beauty. Like Miyu, she’s a high-specs lady that can flawlessly do anything, dance or flower arrangements, tea ceremonies of course, piano or swimming, archery and aikido. It seems there was a phase in which she was bored of her free time and was crazy about acquiring qualifications, and she has a lot of qualifications without any utility in particular like bookkeeper, judicial scrivener, TOEIC, boiler engineer, interior coordinator, manicurist, fugu chef, etc…
“In this upcoming era, I also want an IT qualification! How about the Ichitaro1 licensure examination?!”
That was Hiyoko-chan, whose relationship with PCs wasn’t her forte. Well, the era is the era, right? 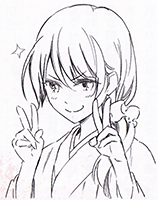